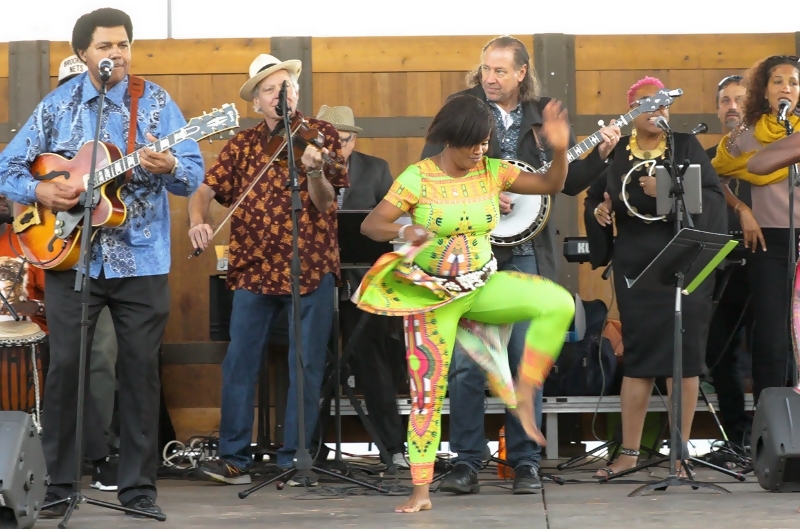 Through this new and exciting CD release entitled “American Trails”, Guitarist/Vocalist Pascal Bokar, Father of the “AfroBlueGrazz” sound makes a resounding musical statement regarding the unique nature of the multi-cultural expressions and legacies of West African heritage and African American traditions through the Blues. 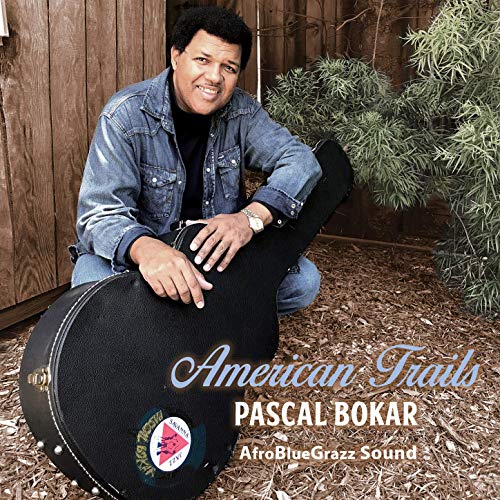 This new Blues based CD entitled “American Trails” by virtuoso guitarist/vocalist Pascal Bokar connects the American musical traditions of the South with the original 4 string instrument from Mali West Africa, Ngoni or banjo and the West African balafon (ancestor of the xylophone) in a powerful rhythmic and multi sonic contemporary gumbo that one has yet to discover.

“American Trails” deepens Pascal Bokar’s exploration of the Blues in his “AfroBlueGrazz” concept with an opening ear-popping version of Blues Great Otis Spann’s composition “The Blues Don’t Like Nobody” in a duet with vocalist Paula Harris and some blistering scat/guitar singing.

The first track of the album is followed by the sultry ballad “I Wanna See You in My Dreams” also featuring Paula Harris. The funky, grooving “I Can Tell” introducing the West African balafon (ancestor of the xylophone) and the banjo is a hard pulsing number that is sure to get everybody dancing reuniting the old sonic landscape of the American South in a contemporary Blues and call and response format. “Your Smile Inside My Nights” projects Pascal’s mellow baritone vocals in a light, syncopated and dance pulse followed by the hard hitting Blues instrumental “Let It Groove, All Night Long”. The album “American Trails” closes with “Everytime I See You There “featuring Pascal Bokar's fast and delirious guitar work which sums up this upbeat release that will delight audiences of all ages and tastes.

CD “American Trails" is distributed nationally and worldwide by the SUGO Music Group of Half Moon Bay, CA, USA and Savanna Jazz Records.

Born in Paris, France and raised in Mali and Senegal, West Africa, Pascal Bokar had a chance growing up to hear the musical, harmonic, melodic, rhythmic, dance and spoken words traditions of West African music and culture that informed his heritage through the musical legacies of instruments such as the Ngoni (banjo) or balafon (ancestor of xylophone) which will later define the early cultural and musical foundations of the American South through the migrations of West Africans through the Atlantic Slave Trade (1550-1888).

Throughout his productive musical career, guitarist/vocalist Dr. Pascal Bokar Thiam has always understood the connections between West African music and the sounds of the American South. His landmark book "From Timbuktu to the Mississippi Delta” with a foreword by NEA Jazz Master, Composer, Pianist Randy Weston, discusses the music of the three empires that dominated the culture of West Africa starting in the 6th century, tracing the music from its role in the culture and daily life of Africa to its eventual emergence in the United States. In his teachings, lectures and music (where he displays his own individual voice), Pascal has consistently paid tribute to his ancestors. “As a musician, I have always tried to synthesize the convergence of African esthetics and appreciate their influence in the music of the African American communities of the American South, from the rural sounds of the Blues and Gospel into this music we call Jazz.”

Pascal Bokar’s CD "American Shores", in the “AfroBlueGrazz” style coined by the album’s producer Greg Landau, was an ambitious fusion of textures and styles that comes from Bokar’s unique cultural perspective and paved the way for the new CD entitled “American Trails”.

As an accomplished jazz guitarist and scholar of African music and Jazz he consistently heard clear examples of African musical concepts and instruments throughout his musical explorations. In both projects he brought together accomplished musicians from Appalachia’s bluegrass style with Senegalese master drummers, African-American Rhythm and Blues singers, funky keyboards, and the stomp/clap percussion of a gospel choir. This eclectic cross cultural mix brings together long lost musical relatives as a platform for Pascal’s rich guitar and vocal improvisation. Pascal Bokar is the Father of the “AfroBlueGrazz” sound.

Pascal Bokar studied at the National School of Arts in Dakar, Senegal and at the National Conservatory of Nice, France where he started working professionally with reedman Barney Wilen. In 1983, Pascal attended the Berklee College of Music in Boston, MA USA where he received the Jim Hall Jazz Master Award for Guitarists. He performed with Jazz Greats Dizzy Gillespie, Donald Byrd, Donald Bailey, Donald Brown etc...he is the recipient of the Outstanding Jazz Soloist Award presented by Dizzy Gillespie and James Moody. In 1999, he received his Master’s Degree from Cambridge College, Massachusetts, USA and in 2006 received his Doctoral Degree Summa Cum Laude from the Graduate School of Education of the University of San Francisco, CA USA. He is currently faculty in charge of Jazz Studies in the Performing Arts and Social Justice Department of the University of San Francisco, CA. USA. He is also the owner of the award winning Savanna Jazz Club of San Carlos, CA USA.

Pascal Bokar previous recording "Guitar Balafonics" was selected by Downbeat Magazine as one of the “Best CDs of 2015.”and received a 4 star review. Pascal Bokar is listed in Jazz journalist Scott Yanov’s Book entitled "Great Jazz Guitars" published by Hal Leonard. Pascal Bokar has been a headliner at more than 50 Jazz festivals nationwide and has performed in Europe and Japan.