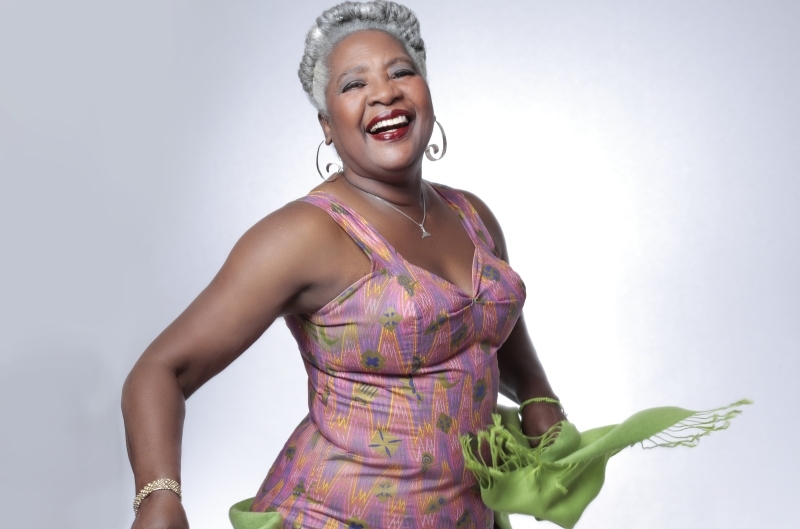 Gladys “Bobi” Céspedes has been at the forefront of representing and promoting Cuban music in the Bay Area and the United States for over 40 years. Bobi’s music integrates Cuban folkloric and modern elements in an authentic and distinctive sound. Her resonant voice and dynamic stage presence lead audiences on a journey from Yoruba incantations to the Cuban son. She can belt out a rumba or move you to tears through a heart wrenching rendition of a classic bolero. Along the way she shares her narratives of family life and love, and the wisdom of Afro Cuban fables. Always present is her chambo—that vibrant Cuban soul–resilient and creative.

A vocalist in the Cuban son tradition, composer, band leader and educator, Bobi first won international recognition as director and lead singer for Conjunto Céspedes. The band was recognized as an early exponent of world music for their unique approach to Cuban dance music, incorporating jazz elements and folkloric idioms with the Cuban son. With them she recorded 4 albums, including Una Sola Casa and Vivito Y Coleando which won awards for Latin Album of the Year in 1993 and 1995 from the National Association of Independent Records Distribution (NAIRD).  Conjunto Céspedes toured nationally and internationally, winning raving reviews in every major city where they performed, and opening for such notable stars as Celia Cruz, Tito Puente, Ruben Blades, El Gran Combo, Los Van Van  and Brian Ferry.

Since 2003, working in a septet format, Bobi has continued to perform and tour, and recorded two albums under her own name: Rezos on Six Degree Records, and Patakin on VL Sounds. Rezos, a blend of Cuban son and electronic beats, included the track “Awoyo,” a composition featured in season 4 of the smash Showtime series Dexter.  (Other film credits include Les Blank’s Sworn to the Drum, and Peter Bratt’s, Follow Me Home.  Her recording with Conjunto Céspedes, Na’ Ni Na’,  was part of the soundtrack for the 2006 film Half Nelson).  Bobi is proud to have been invited to perform at the Freedom Sounds Celebration for the dedication of the National Museum of African American History and Culture in September 2016, sharing the bill with such illustrious world music divas as Angélique Kidjo and Meshell Ndegeocello.

An offspring of a large Cuban musical family that kept alive African beliefs and practices and Lucumí priestess for over 50 years, Bobi has played an essential role in bringing Afro-Cuban rhythms and rituals to the Bay Area for nearly half a century. By providing fresh ways for contemporary audiences to be touched by Cuban music, she furthers the legacy of the great soneras, Celia Cruz and Omara Portuondo.  “Ms Cespedes’ voice is supreme: powerful, full of strength, even when she whispers…” (Descarga.com). In the rich field of Cuban music, Bobi Céspedes stands out as a gem and can rightfully be considered one of our national cultural treasures.

View the embedded image gallery online at:
https://www.montunoproductions.com/index.php/artist-roster/item/130-bobi-cespedes#sigProId867e8dec7e
More in this category: « The Touch Of Class Band Jessy Díaz »