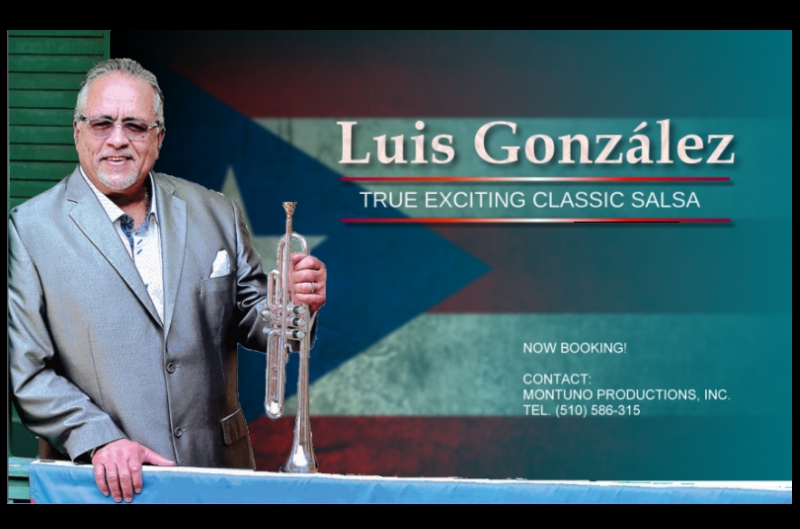 In the mid 80s, Luis González scored one of the most inspiring and career transforming gigs, touring and recording with one of his heroes, legendary percussionist and bandleader Ray Barretto (renowned by the masses for his 60s hit “El Watusi”).

The Puerto Rican born, Milwaukee WI raised trumpeter was flattered when he heard Barretto tell a large TV audience that members of his large ensemble would someday become bandleaders and solo artists in their own right. A few decades later, after an extraordinary career working with some of his native island’s greatest artists (Tito Allen, Santitos Colon, Adalberto Santiago, Jerry Rivera) and the world-renowned salsa orchestras of Willie Rosario, Mulenze, Luis Perico Ortiz and Tommy Olivencia, González fulfilled Barretto’s powerful prophecy by launching his career as a recording artist.

At the urging of Rosario, González formed The Luis González Orchestra, which released its critically acclaimed debut album Tributo a Un Gigante in 2010. The title was a reference to Barretto, the chief inspiration behind the approach the trumpeter took to creating his multi-faceted, high energy, brass intensive 12-piece salsa band. Inviting top Puerto Rican musicians and vocalists to join him, he mixed New York style and Puerto Rican style salsa, and as he says, “put it in a big kettle, boiled it together and created my own style. One of the main things that caught my attention was the way Ray selected composers, tunes and arrangers. Once I formed the band, we rehearsed for six months every Monday for four hours until this hybrid style gelled.”

As explosive as the music was, the excitement generated by Tributo a Un Gigante was simply a warm-up for the freewheeling burst of power that drives The Luis González Orchestra’s new full-length collection El Tsunami de La Salsa - a pumped up old school salsa autentico project whose title is also González’s nickname. While fashioning the ensemble’s debut to introduce his unique style, he and his team of composers, arrangers and musicians made the new collection more aggressive, with more complex, multi-faceted, highly danceable arrangements.

“When I’m making an album, I think about the audience first and what we want to accomplish as musicians second,” says González. “It occurs to me that dancers, or people that want to use our music to dance to, are going to buy these recordings. So we wanted to make it very exciting, with a pounding brass line, with the mambo coming up strong and that rush of heavy sound that will get people to come out and dance. The idea is to bring that true excitement of classic salsa back, not only with a big brassy sound but also with a mix that allows you to hear every single instrument and puts the vocals out front. In many ways, I’m still paying homage to Ray Barretto, creating a master class for my musicians based on the way he created his sound. We’re all really having fun!”

After years of playing NYC, throughout Puerto Rico and the U.S. and touring Europe as part of prominent salsa bands, González has finally stretched his creative muscles as a prominent bandleader in his own right. Since making its Stateside debut as part of a competition at South of Congress, a prominent several day festival in Chicago, the Luis González Orchestra has performed regularly at many prominent Puerto Rico based festivals (including ones in Mayaguez and the Carnaval de Ponce) as well as prominent San Juan hotels (Marriott, Sheraton) and venues like the Latin Roots Club of San Juan. In support of El Tsunami de La Salsa, the group will be touring in 2015 in South America (Columbia), Central America (Panama), perform in Mexico City and do select dates on the West Coast.

The ensemble makes a powerful, high-energy presentation (that González likens to “a big wave”, (i.e. the Tsunami), with three trumpeters (including González), a trombonist, a complete Latin rhythm section and three singers. During their shows, half the people are watching and taking videos, while the other half are up dancing. “I’m having the most fun I’ve ever had in my career as a musician,” says González. “We’re bringing smiles to the people and are a great stress reliever that makes them dance away their problems for a little while. Hearing that people are enjoying our performances brings us satisfaction that is more important to us than any amount of money we earn. We are proud representatives of Puerto Rico and its wonderful legacy of salsa music.”

With nonstop energy and a wild, constant, high octane swirl of bold, splashy brass, rich percussion textures, spirited Latin piano romps, compelling lead and backing vocals, infectious melodies and toe-tapping grooves, El Tsunami de La Salsa - perfectly embodying its title – sweeps the listener into a wave of joyous, dancing delight. As the producer, González, working with top engineer Vinny Urrutia, makes sure that each instrument receives prominent features throughout. The ensemble includes vocalists Eric Pabón, Agustin Marrero and Ricky Ramos – each of whom is given lead vocals interplaying off the other two, which form a call and response chorus. Another prominent performer is pianist Pedro Bermudez. González was honored for El Tsunami de La Salsa by Puerto Rico’s National Foundation for Popular Culture for best recording of 2010.

Born in Arecibo, Puerto Rico, González grew up in Milwaukee, WI, where his family moved when he was an infant. Starting on his multi-faceted musical journey at age seven, he first played accordion and timbales before he began on trumpet at age nine and took private lessons from Roy Howards. For many years during high school, he took classes at the Wisconsin College Conservatory of Music. After a very musical high school career which included playing all different genres of music in many bands – as well as the distinction of being the only Hispanic to make the All-City band - González continued his education and majored at the Conservatory in classical trumpet with a minor in jazz.

After relocating to San Juan, the New York band Conjunto Clasico – which he had met during their Puerto Rican tour – asked him to join their band. He quickly moved to NYC, where he lived and worked for many years, including his sting with Ray Barretto’s group. Moving back to Puerto Rico permanently in the 90s, González launched his career as a freelance trumpeter, contributing to recordings and live performances of top Puerto Rican and Latin artists and bandleaders. Beyond those mentioned earlier, his resume includes Roberto Rohena, Bobby Valentin, Puerto Rican Power, Nino Segarra and Celia Cruz. He has also served as musical director for Lalo Rodriguez, Luisito Carrion, Anthony Cruz, Wichi Camacho, Mel Martinez and Carolina Lao.

“After playing for a wild array of legendary salsa artists and large ensembles for so many years, Luis González has drawn from the greatest of those influences to create a fresh, combustible vibe that has established him as an innovator and his group, the Luis González Orchestra, as a formidable new force in salsa music. Beyond being buoyant, joyous and supremely danceable, the nine tracks on El Tsunami De La Salsa also illuminate careful attention to every sonic detail and texture – making this all at once a technical, creative and commercial triumph. Jazz fans will relish the rich solo textures and bursts of improvisation. Tech-heads will marvel at the production and sonic invention. And the rest of us? We’ll be too tired from dancing to worry about all that! With his mix of classic New York and Puerto Rican concepts, González lights the way for the bright future of salsa music.” – Jonathan Widran